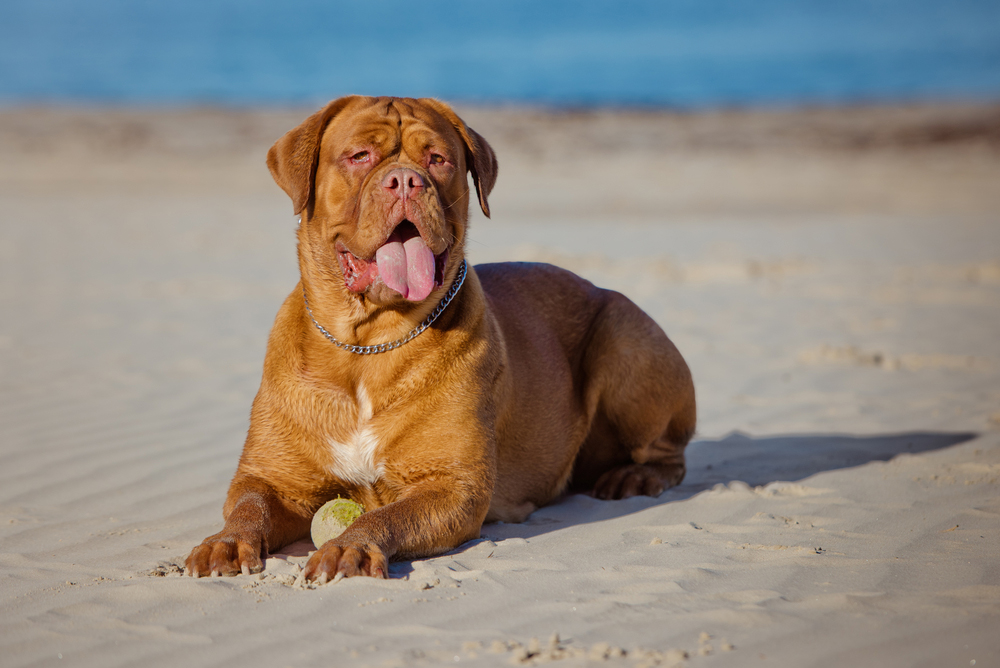 Looking for a
Dogue de Bordeaux?

If you are looking to buy or adopt a Dogue de Bordeaux, you can view our:

At 140 pounds in weight, the Dogue de Bordeaux is a whole lot of dog! He’s a breed that not many people are familiar with and one that you really need to be certain of before making a commitment.

The Dogue de Bordeaux is also known as a French Mastiff and is one of the powerful Mastiff family, so even being greeted enthusiastically by him at the front door can be overwhelming!

He’s another kind-of-cute-looking-but- quite-ugly big dogs, but if you take him on he will love you forever.

The Dogue de Bordeaux needs a real authority figure in his life otherwise he could try to become dominant. Owners should begin training very early on to establish this leadership and be prepared to give firm and clear directions and plenty of repetitive commands and rewards to get this dog to comply.

He is not the easiest to train and has a mind of his own. Socialisation and puppy obedience classes really are a must for this breed; he’s not much of a listener, so perseverance and consistency will be key to training this big lad. Owners can expect to still be training the Dogue de Bordeaux when he’s fully grown!

He’s can be a strong willed and stubborn guy if he’s not properly managed.

Definitely not the right size for apartment living, the Dogue de Bordeaux needs his space. He’s a calm dog and not known for destructive behaviour in the home. He’s also loyal and devoted to his handlers and will view guarding his home and family as one of his natural roles.

If the Dogue de Bordeaux is brought up with smaller pets then he is usually tolerant and will actually see them as part of his family. Likewise, if brought up with children from puppyhood, he is very kind and affectionate. Like all dogs, the Dogue de Bordeaux should be supervised around children and watched very carefully if a child brings a new friend into the home as the dog may perceive him as an intruder.

The Dogue de Bordeaux does not like to be left alone even for a short time, so a commitment to this big guy really is for life. It’s not likely that you’ll find anyone to look after a dog of his size to let you go on holiday and there’s no way you can put this guy in a kennel because it would literally break his heart.

The Dogue de Bordeaux is also a prolific drooler which can be off putting for many, so you really need to become familiar with handling this breed before buying one.

Description of the Dogue de Bordeaux

If you’re looking for a Dogue de Bordeaux puppy in Scotland, you need to know that he’s a strong, powerful dog that needs a strong handler. He is one of the ancient French dog breeds and his strength was used in days gone by to pull carts and carry loads, as well as for his hunting, herding and guarding abilities. He was also used as a fighting dog in France.

The Dogue de Bordeaux stands at between 58 and 75cm and weighs in between 54.4 and 65.2kgs! He’s a short, stocky mastiff with a thick muscley neck and distinctively large head - with eyes wide apart and wrinkles on his expressive face.

There’s no doubt that he’s a rather intimidating looking fellow with an aggressive demeanour, however, in the right hands, he’s a gentle giant and that’s what makes him a popular dog in France and across the globe.

The Dogue de Bordeaux’s coat can come in colours from red to mahogany, fawn, red with a black face and tan.

The Dogue de Bordeaux is actually quite athletic and agile and can run for miles if he wants to. He’s also a bit of a high jumper which needs to be watched if he’s prone to terrorising the neighbourhood cats!

Males tend to be more dominant than females but with the correct training and socialisation, these behaviours can be controlled. He’s not the best dog to have around very young children due to his sheer size, but he can be good dog around older kids as long as play is supervised and children learn the dog’s boundaries.

He’s very loyal to his handler so once he feels safe and secure that he has a leader to look up to and trust is established, he should become biddable in his eagerness to please.

If you’re looking for a Dogue de Bordeaux puppy for sale in Scotland, it’s worth knowing that these dogs do not live very long lives and the average lifespan is around 6 - 8 years-old. It’s a short but very intense life with this big chap and anyone taking him on must know how to handle him!

If you’re looking for a Dogue de Bordeaux puppy for sale in Scotland, you should know that he is a dog that likes to be active though he doesn’t need just as much exercise as you would think. An hour to an hour-and-a-half would be sufficient for the Dogue de Bordeaux, but this should be spaced into a few walks a day to keep him physically fit and mentally stimulated.

Fencing in a garden that houses a Dogue de Bordeaux should be high and sunk low into the ground to stop him from jumping over or digging a tunnel out!

The Dogue de Bordeaux has a short coat which makes grooming pretty low maintenance and a brush once per week is sufficient to keep his coat looking good. That said, owners should aim to clean and dry the folds and wrinkles on this big guy’s face so that no fungal infections can take hold. His ears should also be checked regularly and cleaned to avoid a build up of wax.

If you’re looking for a Dogue de Bordeaux puppy in Scotland, you should know it will set you back £700 to £1000 to buy one of these big guys from a reputable breeder. Additional costs including food, pet insurance, vaccinations, grooming and neutering will take monthly costs to around £200 per month

Looking for a Dogue de Bordeaux?

If you are looking to buy or adopt a Dogue de Bordeaux, you can view our:
for sale section
for adoption section
for stud section

Dog Breeds
If you’re looking for a dog for sale in Scotland look no further. Simply, read more ...

Dog Breeds
If you’re looking for a dog for sale in Scotland look no further. Simply, read more ...